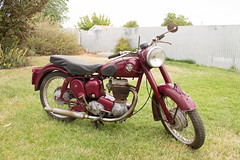 My Dad bought this bike in the 1970s, perhaps as late as the 80s, to get his motorcycle license on. He rode it for a while, managing to kill the primary gear because the seller told him to run it dry (he replaced it and the gear vendor gave him an oil specification to use, and it’s been on the same primary gear since) and then eventually parked it up at my Grandparents’ place in Inverloch, Victoria (where all old mechanical equipment in our extended family went to die) after upgrading to a 750.

When my Grandfather retired, he began restoring several of the old vehicles laying around, including this bike. He for some reason painted it the Maroon color it is today, and faithfully restored as much as he could, including doing the leather upholstery himself. Unfortunately either his cheapness or lack of finances shows, because many of the chrome parts are simply painted silver and the electrical system was in a shambles.

My grandfather passed away in 2007, and my father reclaimed the bike since it was originally his. It sat in Dad’s shed with very little attention - apparently a cork seal in the fuel petcock valve meant that fuel simply leaked out of the tank almost as fast as you could put it in, so they never got it running.

We brought it to my place in 2015, where I began the process of re-restoring it. It had 1303 miles on the clock when I got it, however I don’t believe that to be correct - my father certainly put more than 1300 miles on it, and bought it used, but we don’t believe anyone put enough miles on it to clock it over 100,000. It’s possible Grandad was forced to replace the speedometer at some point, or he may have cracked it open to fix it and in the process reset it.

This puts both sets of numbers squarely in the range for 1957, I am not yet sure how that will work if I am fortunate enough to get it running and then go to register it with VicRoads.

These bikes are actually worth very little these days, mostly due to their ubiquity - the value of this bike to us is almost entirely sentimental.