I’ve been working pretty consistently at getting the BSA in roadworthy condition, but unfortunately over the last month or so I’ve spent probably more than I should have, so it’s time to cool it and let the budget catch up.

But I’m still really manic about this particular project, so what to do? I know, I’ll find something I can do that doesn’t involve spending money. Let’s have a look at why the speedometer snaps back to zero constantly.

I spoke to my sister’s boyfriend Jason, who among other things repairs clocks. Between his explanation of the problem (quite terse, unfortunately because when I first spoke to him about it I was fishing for me to leave it with him and have him recondition the entire thing without me having to touch it) and went looking for some documentation about it, these things are absolutely fascinating.

They’re also pretty much always north of a thousand bucks to replace, so they’re somewhat terrifying - I kept reading. Probably 20 hours of reading, all told over the course of a couple of days, most of that before I even took the thing off the bike.

I managed to disconnect the thing, and using the nylon-strap wrench for removing the oil filter off the Sprinter, I got the thing apart. Now to work out what’s wrong. 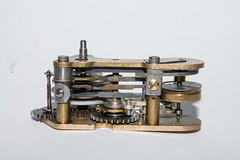 Basically, they’re called a “Chronometric” speedometer. A series of gears turn a clutch, which is connected to a cam with an escapement on it, locking it at approximately one turn every $\frac{3}{4}$ of a second. Bypassing the clutch, another couple of gears spin up one disc, which has a lug fixed to it that pushes a lug on another gear. These are connected by a third lug to the gear that has the needle on it.

I’m making it sound worse than it is, here’s how it works: For the first fraction of a second, the speedometer drive pushes all three of the ratcheted gears connected to the needle around far enough so the needle points at how fast the wheel is actually turning. After that time period, the cam reaches a certain point where it lets the second wheel go. Then the first one is let go (I might have this backwards, writing it from memory). The idea being that if, in $\frac{3}{4}$ of a second, the speed has not changed, the wheels will end up back in the same position then the third wheel is let go, so the needle won’t move.

Assuming the speed has slowed, the first wheel won’t be pushed as far in that time, so when the second wheel is released, it snaps back to where the first wheel is, and the needle moves back to the slower speed when the top “stabilizer” disc is released by the cam. The opposite occurs if the speed has increased - the needle is pushed further around.

If that all sounds really complicated, it’s because it is - there’s a mess of tiny brass moving parts inside of it that looks like the picture to the left. The benefit to this complexity is accuracy: Instead of using magnetic drag or centrifugal force or any other method to determine speed - both of which will vary in accuracy depending on the strengths of magnets and springs, the escapement will stay at approximately the same fraction of a second for a long time.

The result is a really neat effect - an analog speedometer, that “snaps” to the current speed with precision every fraction of a second. Contrast to my grandfather’s Bedford truck, which used a magnetic speedometer, which would bounce around all over the place.

It might be visible in the picture to the left, but the four-tine “ratchet” spring that holds the discs in their position until released by the cam is actually missing a tiny chunk out of it’s bottom tine. That was causing the bottom disc to be released at the same time as the second disc, which was what was causing the needle to snap back to zero.

At first, I started looking at replacement springs… about $50AUD to get one shipped from the UK. So much for not spending any money on the thing this week! Or perhaps it could wait. I spoke to Jason again, who basically said just to nip the thing up in tension a tiny bit - since the tension of the springs plays no part in the accuracy of the speedometer, that was satisfactory and when I gave it a shot, it worked.

Put it back on the bike and test it out, and sure enough, I’ve got it licked. I won’t bother replacing the spring until it becomes a problem, because frankly there’s more important things to spend non-existent money on.