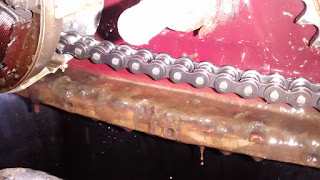 Very exciting day today, the 12v Lucas coil I ordered at the local motorcycle shop finally came in. I suppose it was only two weeks, but it felt significantly longer. Shot in to town to pick it up, pulled the house battery out of the van, and wired everything up in a rather makeshift fashion. I sprayed some carb cleaner in as fuel just to see if it would fire, and not only did it fire but it ran for a good few seconds, which I was over the moon at.

I lack the stuff to fix the fuel system, and can’t do anything about it this weekend, so I turned my attention back to the electrical system. Disconnecting the alternator completely, I have no continuity to ground (which is supposed to be good) from either of the wires, continuity with minor resistance between the two (forget how much) but when I kick it over I only get about 3VAC. It’s enough to make a 12v test lamp glow, without blowing it, but it’s not particularly bright either. I’m not actually sure whether that’s a bad thing or not, as I don’t have any documentation on testing the alternator, and everything I know about testing them requires having a battery and a regulator/rectifier present, of which I have none.

The good news is if the alternator does turn out to be weak, they’re pretty trivial to re-wind… which is good because they’re apparently about $250 for a rebuilt one! The bad news (I suppose, it’s not the end of the world really) is that the primary gear oil appears to have had water in it - see the gore in the photo attached. There’s a fair amount of sludge still in it, that I’ll clean out. I can run the thing in the shed for a few minutes at a time without any primary gear oil whatsoever so I’ll worry about that later. I only removed the cover because I needed to get to the alternator.