A bit of a panic last night - I hooked up the regulator/rectifier I bought to the AC output of the alternator, put my DMM on it and… I get about 4vdc max and idle. What the hell? Took everything apart and measured the AC output of the alternator and I’m getting 15~30vac off each of the coil pairs (slightly less off one than the other, but that’s normal). Something’s not right here.

Made a forum post to inquire about it, and also asked on IRC and then went to bed to sleep on it. Upon some advice I received, I tested not only the voltage of the alternator, but also it’s ability to provide current, by putting a 12v 55w headlamp bulb across the various posts. The two that didn’t provide a voltage were the ones that are supposed to be tied together, which proved to be correct (unsurprising, as I wired it the same way my grandfather had it), and it lit the bulb bright enough to dazzle me (as well it should at nearly 30vac!). In my (extremely uneducated) mind, this left four potential options:

The third option seemed rather unlikely, and the first one as well because not to toot my own horn, but there really isn’t much to the wiring system. Not a lot of space to stuff things up (not that I didnt’ try, see later). I decided to act upon the advice of Peter on IRC, and connect it to the 12vdc system and then measure the DC voltage - with the motor running it should be around 14.4vdc or thereabouts.

So I connected it all up, fired the thing over and sure enough I’m getting a nice stable charging voltage. Better still, unplug the battery and the unit will run entirely from the alternator! Then I switched the key off and… it’s still running? It turned out I’d grabbed ahold of the wrong wire when I connected the regulator, and had therefore connected it on the wrong side of the key. That was trivially fixed, and when I’d done so the bike ran exactly as expected. Surprisingly enough, the bike even starts without a battery, though slightly more difficult. So that basically eliminates the first three options, but also introduced the potential issue that maybe the $20 DMM I bought from Jaycar is a piece of trash.

On the whole though, I’m really happy with the electrical system so far. The Tri-spark regulator/rectifier (part #VR-0001) does the job really well, though I haven’t tested it’s ability to cope with lights so I suppose it’s possible that the alternator isn’t quite up to snuff (ie if the rotor is slightly demagnetized). 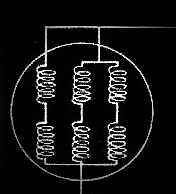 There was some confusion for a time, as the three wire alternator is described as having a “centre tap”, which I don’t think is the right word for it, because you connect that wire to one of the other wires to convert it to a two-wire alternator. The alternator basically looks like the diagram on the left when bridged, and I wouldn’t exactly (though I’m no electrician) call either of the top wires a “centre tap”. Basically the four-coil circuit of the alternator was only connected when the headlight was switched on, and now it’s connected all the time because I have a regulator in the circuit.

Now I have to turn my attention to the fuel leaks, of which there are many - as I mentioned the other day, the carb bowl is leaking. For some reason fuel sprays out the “tickler” as well, which is new - I’m suspecting maybe some dirt that was in the tank has found it’s way to the needle/seat. The fuel petcock is also in appalling shape - I tried the recommended process of boiling and heating the cork, then applying a mix of oil and petrol which is supposed to make it swell up, but I think it’s too far gone. I’ll have to look into replacing the entire petcock, but for the moment I’ve just sealed it up with some electrical tape jammed in, which is why the carb now leaks whenever there’s fuel in the tank.