As mentioned earlier, we got sent up to Kulgera,  NT to pick up a truck and it turned out we had to spend the night there. Oh well, one night without GSM service won’t kill me, right?

The very next morning, not two kilometers out of town we hit a Kangaroo out of nowhere. The coolant light came on, a surefire notification that we’d cracked the radiator. We nursed it back in to the roadhouse to evaluate our options. 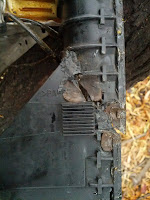 We ended up pulling it out, removing the remains of the fan and shroud, and I pulled the plastic tank off the side of it and welded it up with what was left of the fan shroud and a $15 butane torch from Supercheap Auto. After pressing the clips down firmly, by squeezing with vice-grips and then tapping on the centers of the clips with a screwdriver and a hammer, the thing held water “reasonably” - a couple minor leaks in the core itself, which we semi-cured using the old black pepper remedy.

We scavenged every bottle we could find, and filled them up with water from the bore at Kulgera, then set out early in the morning. By about Coober Pedy, I had the insane idea that this was actually going to work. So confident were we that things were going well, that we even drove during the hot part of the day, which I was going to avoid but we didn’t really have anything to do around Coober Pedy and felt like we’d worn out the welcome the $8 bowl of chips bought us in the Roadhouse. 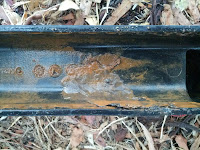 We refilled the bottles at every rest stop we could find, and made it to Glendambo well before nightfall. The next morning we set out bright and early again, and made it to Port Augusta - which I basically considered home free because of the plentiful phone service. The best part is that somewhere around Port Augusta, we finally blew out whatever crap was in the motor that was causing it to de-rate - automatic shifting started working and it feels like it’s found another 100HP.

Update: The van was actually in limp-home mode due to a faulty boost controller, which I eventually replaced almost 6 entire months later.

This afternoon we made it into Adelaide, where we carried out our stress-relief ritual of stopping at the beach at Semaphore Park. The day couldn’t have been better, Duncan really enjoyed it, and I managed to spend a few minutes on the phone organizing parts for the next day to put the van back together.

But seriously though, it’s not every day you get to tell your friends about the time you drove 1269KM (788mi) on a radiator held together by a botched weld, black pepper, and the hopes of a desperate family.