As I mentioned previously, last time we were up near Australia’s Northern Territory we had some troubles with the Transit and we pretty much just stopped at the border, rested a bit then bolted south. 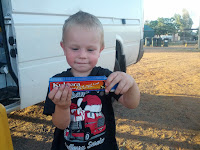 This time we had to meet a truck up in the sleepy pub town of Kulgera, home of “the first and last pub in the NT”.

It’s actually a pretty nice little place, really. The heat is characteristic of the area, and unlike Marla to the south, shade is quite sparse around the roadhouse. Everything’s pretty expensive (but basically north of Port Augusta, everywhere is) including drinking water which we needed to replenish.

The real kicker is there’s no GSM service to speak of - intriguing really considering that some of the “areas” further south with absolutely no other services to speak of have GSM via Telstra.

Unfortunately, as we were leaving to head south, a kangaroo jumped out from behind about the only bush in the entire area - the rest of the road is about a hundred meters wide of just gravel and ground bushes.

Yet again, we made the foolish decision to leave home without having arranged a bull bar and it has led to more troubles. At least the radiator and the fan at destroyed, and it’s Saturday so we won’t be going anywhere for a while.

Having said that, the hospitality of the folks at the Kulgera Roadhouse can’t be understated.