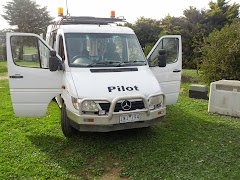 After erroneously buying the XF Falcon, and sinking several thousand dollars into it trying desperately to get it to do a job it just wasn’t really suited for, I gave up and took out a loan to purchase the Sprinter in February, 2013. It turned out to be a fantastic purchase, costing us the reasonable sum of $11,500AUD.

It’s a 3-tonne, 160HP medium-wheelbase, medium-roof Sprinter that was formerly an Ambulance for Ambulance Victoria. It has the venerable OM612 2.7L 5-cylinder Common-rail Turbodiesel, with the computer-controlled manual “SprintShift”.

After almost immediately smashing into a Kangaroo in outback N.T., we fitted a bullbar to it and began the long road to diagnosing an intermittent turbocharger, which I finally repaired for good in June, 2013, almost immediately blowing an injector seal.

Since then, we were lucky enough to put on almost 200,000KM on it with very little mechanical failures. Sure, we replaced things like front struts, and I had a failure of some relays which should have already been replaced under recall, but it’s been a spectacularly reliable vehicle and seen almost all of Australia, with not-unacceptable fuel economy.

It features a queen-sized bed with storage underneath, AGM backup battery with automatic charging solenoid, inverter, a TV with USB input that runs off the 12v, an Engel refrigerator and a bluetooth head unit.

It received a rebuilt alternator at 396,000KM and a new radiator, coolant level sensor and fuel lines not very long after.

Unfortunately, around 2017 or so the pilot vehicle work mostly dried up, and as I was completing my studies. I sold the Sprinter to Dad, who wanted to keep doing it for a bit and managed to kill his. He then managed to kill mine, made one out of two, and eventually sold mine to someone who hoped to rebuild it. From a cursory registration search with VIC Roads, it does not seem they were successful (unless it went to another state).