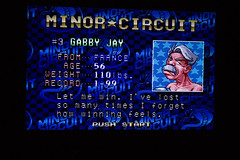 Yet more eBay stuff today… I could get used to this.

Today it was the AV cables I bought for a couple of our video game systems. I bought a component cable for the Wii, which is supposed to help the interlace tearing in some games such as Skyward Sword (during the cut scenes it’s really noticeable). When I turned on 480p it looks substantially sharper in the Wii menu - that could just be a tiny bit of confirmation bias though (that is, I spent $7 on a cable so I would want it to look better) - but it doesn’t appear to have made any difference in game. I’ll have to investigate if there’s something I have to do in-game to get it to work as well, I’m told 480p output is only available on some software.

Next up was the AV cable for the SNES. I decided I am not really willing to mod my SNES yet, and the Retrovision HD cables seem to sell out as fast as they restock, so I decided to just stick with composite for the time being. The results are substantially better - there’s quite a bit of noise coming through the RF in the form of little white specks that fall diagonally across the screen. Presumably by the angle of the specks we could work out what frequency they are and filter the interference, but the component AV cables were so ridiculously cheap it’s not worth the effort.

However for some reason switching the SNES between RF and AV, the RF signal is not stretched (well, it’s double-scanned at least because of the 288p input signal) but the AV signal is stretched to 16:9 and looked horrific (RF vs AV). I figured out how to disable that setting on the TV though, which makes things quite a bit better (RF vs AV vs emulated screenshot).

Basically without dropping money on an RGB cable and a decent CRT monitor it’s never going to look “right”, but I’m pretty happy with how it is. Photo shown is the game through the composite video input.