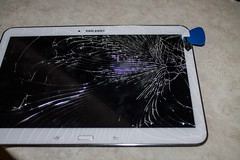 More eBay stuff today, this time an unexpected delivery knock at the door in the morning. It’s the digitizer to Duncan’s tablet! He broke it a few weeks back playing Pokemon Go, when he managed to drop it in the main street. He was utterly devastated, and I gotta admit I was a little upset as well. It turns out they’re not particularly expensive to replace, if I’m willing to wait for one to come from China and replace it myself.

So it turned up this morning, which is great because I wasn’t really expecting it for another couple of weeks. Armed with a hair dryer, the little plectrum type dorito of plastic they provide, and a piece of stiff card, I managed to get the old digitizer off without destroying anything except it. Replacing the new digitizer was rather easy, but strangely enough getting the back cover on was the most difficult part.

I ended up getting it finished just before he got home from school, which made him pretty happy.