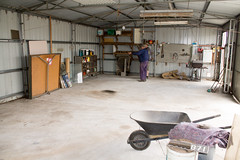 We got up super early boxing day, because Sabriena was going home with Duncan and they wanted to avoid the traffic. Surprisingly, there was very little at all, and no cops to speak of - they made it home safe by 10:30.

I stayed behind in the van, because Grandma finally sold her house and is moving in the 8th of January, so Dad and I headed down to Bayles leaving at about 11:30 or thereabouts.

Reaching the correct corner of Melbourne, we decide to take advantage of the boxing day sales to get Grandma the laptop she’s been talking about buying for over a year now - what pandemonium! Dad only got photos of one, but there were no less than four cars parked illegally in the handicap spots, we ended up parking on the lawn with lots of other people. All to save about sixty bucks on a laptop.

Ended up going with an Acer E15, as it was about the best specced machine in her price range that also had a full sized keyboard and high contrast on the key caps. Spent several hours tonight upgrading, installing and configuring it, a not-insignificant portion of which was waiting for her old Pentium 4 Dell to do anything. I swear I pressed ctrl-alt-delete and twenty minutes passed before the task manager came up. Things will be a lot better when this thing is in the bin.

The next day was mainly spent periodically checking up on the Windows 10 upgrade (an arduous task, given her 1.5mbps ADSL connection), setting up the wireless access point, and cleaning out Grandad’s old shed. Grandma hired a skip, which we filled to capacity, and several of us took a few things home (her brother Ivan taking the lion’s share, he’s got a good sized shed to fill up with all this crap). There’s still a few more things my other uncles have to come collect, and Dad was supposed to scrap the massive radiator for the dragline before he went home, but couldn’t find anywhere open to take it.