Out to mum and dads early on the morning of the 23rd,hoping to avoid all the traffic idiots - not entirely successful.

I didn’t eat too much Christmas dinner, despite deciding preemptively to suspend counting calories for the weekend. Rather proud of myself, really… I guess I can train my stomach to be satisfied with more reasonable portions. 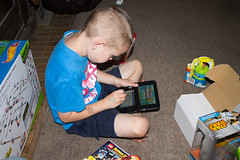 Duncan got a great haul of presents, but was rather upset he couldn’t open the Minecraft Lego set we got him, as I didn’t want him to lose all his pieces. Part of a running joke between Sabriena and I is that our friend Neil only eats butter, real butter, and it’s not difficult to spread as long as you keep it in a china butter dish and don’t keep it in the fridge. I’ve been joking since that conversation that I’m going to find a butter dish in an Opp Shop and buy one, and she managed to find one and wrap it up for me for Christmas, which I found hilarious much to the confusion of my family.

We also bought Duncan a used 3DS-XL, because his old DSi (also used) was starting to pack up, exhibiting the same “folding corner touch screen” behaviour that his cousin Elly’s had, which we’d attributed to her habit of punching the screen when getting frustrated. Duncan absolutely doesn’t do that, so we’re not sure what causes it now… hopefully whatever it is doesn’t affect the 3DS units as well.

Update: Duncan’s 3DS XL was used, and came fully charged - so I unfortunately didn’t notice when testing it that the charging plug wasn’t any good. Took it back to EB (who also upgraded me to a silver card!), but they didn’t have any 3DS XLs, so we had to upgrade him to the “new” 3DS XL, which funnily enough doesn’t have an external memory card slot, you have to remove the battery to access the micro SD card slot. The new unit seems to function perfectly though.