Sabriena has another dentist appointment, so out to Mum and Dad’s last night to spend the night. While there, I was supposed to hook up Mum’s new PVR, which my sister went and took care of (though it didn’t come with an HDMI cable, so I’ll probably get one for her) and the new router Dad bought. I’ve been pretty convinced for a while that the shitty equipment we were using (including a brand new Cisco X2000) was the cause of most of the broadband woes at my parents’ place.

Unpacked it, and it turns out he bought a Netgear DGND3700. We’d previously bought one, but didn’t like the fact that the ReadyShare feature kept crashing the router and took it back. Dad probably won’t have that issue, because his desktop serves as a sort of NAS instead.

Immediately, the thing had a firmware update, which was promising, but I didn’t read the release notes:

Not much of a step, but hopefully there are some bug fixes in it. After hooking it up, ran a speed test and got pretty tolerable results for where they are: 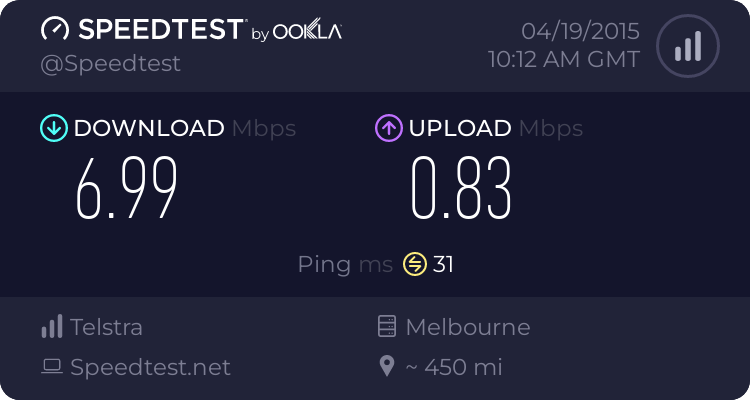 Considering that they are literally on the very edge of serviceable ADSL (neighbours across the road can’t get it), with something around 6KM or so as the crow flies from the exchange and christ only knows what the loop length is, I think that is tolerable if it stays that way. Apparently the Telstra guy had finally (after almost three years of complaints) bothered to check the quality of the line that goes up the road, starting in the pit and working his way back to the exchange redoing all the connections each way.

We’ll find out whether that’s a long term fix or not I suppose.