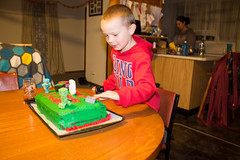 Duncan turned five today (well, sort of - he’s not chronologically five years old quite yet due to being born in USEST).

Unfortunately he had school today, but up early to watch a movie anyway. He got to open his cards before school, one of which contained ten bucks from my grandmother. While he was at school, we decorated the house and wrapped his presents. After school we took him to KMart to spend his birthday money and his allowance, where he bought another Lego set (#70817, we already got him #70808 for his birthday).

Mum and Dad stopped by, and we had Pizza for dinner… followed by a Minecraft birthday cake that Sabriena had designed and made. Duncan alternated between playing with his Lego sets and Disney Infinity until it was bed time.

Tomorrow morning Mum and Dad are going to help take him to school, something he’s been asking for for a long time since they helped walk him to Kindergarten last year - so he’s really looking forward to that.