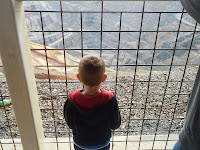 We arrived at Kalgoorlie quite early this morning, as Leonora is not really that far out. Our first port of call was in to the BP roadhouse for a shower, and then back in to town to fetch some supplies. On our way into town, we stopped and drove up to the lookout for the “Super Pit” - apparently the largest open cut gold mine in Australia. 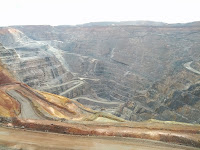 Duncan really enjoyed it, as the trucks and earth-moving equipment he sees almost on a daily basis were actually doing something. The hole itself was impressive, but you can’t help but wonder about the scars we’re leaving all over the earth for the sake of some minerals and metals.

The town of Kalgoorlie itself is… well… I suppose it’s an acquired taste. As far as mining towns goes, it’s rather well equipped and serviced (and I suppose it should be, for the size of it) but the town itself is rather poorly laid out, hard to navigate without a GPS, and the drivers there are complete arseholes.