We made it to Balladonia, WA almost at dark, and Sabriena still wasn’t feeling well so I decided to treat her a meal at the pub. We ordered, and she went with fish and chips expecting it to make her sick again, but it was actually a really good meal - and the price wasn’t even double what you’d spend going to McDonald’s.

I think she was a little uneasy though, as a three year old in a pub is not something typically done in the US. We met a Canadian who worked there, along with a French barmaid, and I decided to stay for one game of pool after Sabriena put Duncan to bed. 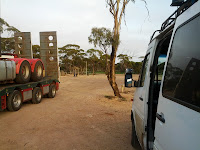 We were so patently terrible that the game was still on the table at closing time, around 8:30PM local time. I’m not sure if that qualifies for one of my “Aussie Merit Badges”: “get kicked out of a pub after last call”, because it was so damn early, but that’s one questionable accomplishment over with.

The next morning, Sabriena and Duncan again checked out the local sights outside the roadhouse. There’s not a lot there, the cool stuff is in the museum (which is free) to the right of the roadhouse cafe. They have information about the Afghans and their camels, the Red X trial car, and mock-ups of the wreckage of Skylab which were famously left strewn across the countryside. I had personally been to Balladonia at least twice and never realized the museum was there until last night.

Mum and Dad spent the night at Norseman, and are hoping to catch us at some point today. I’m expecting Caiguna, although they may turn up here at any minute if we don’t get moving soon.