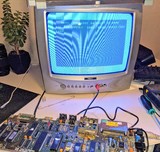 Yesterday, I went out to have lunch with Mum and Dad, and to pick up a UPS from Grog - he was going to give it away on freecycle, and thought I might want it. I had no idea it was such a monster, I’m actually going to have to put a 15amp socket in our garage (more work for Baz) to use it! But yes, I definitely will be able to use this… my current UPS is about 70% loaded with one server and the networking gear on it, this one will snooze all day!

But anyway, on Thursday as I was making plans to do this, I just happened to look at Facebook marketplace, and no more than 5 minutes before someone had listed a Commodore 64 bundle for $50, and they weren’t far from Mum’s place (probably about 10 minutes out of my way). I thought about it for about 10 seconds, then wrote them a message… something like “hey this is a spectacular price, and I’ll be out there this weekend, if no one else has snatched this up yet can I paypal you the money to hold it until Saturday?”. The seller wrote back that she didn’t even know how Paypal worked and that she’d just hold it for me. I did also mention that if she hasn’t plugged it in yet, it’d be better to not… as there’s no telling if the PSU has gone bad and could kill the machine.

She mentioned when I went to pick it up that she’d had many angry people immediately after message her, some even offering more money, but that she’d agreed to hold it for me, which I thought was exceptionally honest in this day and age! She was just happy it was going to someone… she was going to burn it until someone told her to sell it, which is ironic considering the incinerator is where our childhood C64 went. :(

On inspection it wasn’t that spectacular of a deal… I was buying the machine as-is (eBay prices for one that works are between $200 and $300), but more importantly most of the lot has very clearly seen weather. The disks in particular (there’s no disk drive, just some disk software) smell of mold so I’m almost certain none of them are any good. Inspecting the user and tape ports and seeing heavy corrosion I didn’t have high hopes for it working. I bought it anyway, because frankly it’s almost certainly just gonna sit on my shelf and never get used, so if I’m gonna buy one that doesn’t work it might as well be one that’s cosmetically fairly good for a very cheap price.

So we loaded up an absolute ton of crap into the car (also a Commodore!), I gave her the money and off I went. Got home too late last night to do much with it, but this morning I got stuck into it. The motherboard on the bottom side is flawless, but the top side is very badly pitted, so I definitely wasn’t optimistic it’d work. I bathed the entire thing in methylated spirits (Isopropyl alcohol for the north americans), brushed the dirt off with a soft brush, then left it to dry while I checked the PSU.

The PSU’s 5vdc rail checked, unloaded, around the 5.15vdc mark. That’s high, but not overly concerningly so. I still won’t trust it, but it’s good enough for a quick test without too much concern. I looked around for a video cable (no such luck, there is one but I don’t recognize the pinout), so I stripped the wires off the end of an RCA cable, pushed the bare wires into the composite video and ground pins, and held my breath as I switched it on.

And it boots! I ended up cleaning up the keyboard completely and reassembling it, and every key except the space bar works… and I think I can fix that pretty easily.

Now I have the dilemma of what to power it with, and how to get software onto it. I have a datasette - condition unknown - and a pile of tapes - also condition unknown, but honestly who wants to deal with that. The sensible thing would be to buy an aftermarket PSU for it and a 1541 emulator cartridge (probably the Ultimate II+), but that’s about $200AUD more than I’ve already got in it and I’m honestly not sure I care that much right now. Maybe later.

I’m just stoked it works though, and aside from a couple of scuffs and some yellowing it’s in cosmetically great shape (and it’s the C64C we had when I was a kid, only thing I’m missing is the America’s Cup box, but I sure as fuck don’t want to pay for that!). I’m undecided what to do with the software, I might see if I can find someone who’s interested to take it off my hands and test it out, though I might look at fixing the datasette first.