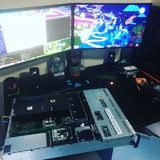 Our venerable fileserver (which was prior Duncan’s desktop, then Sabriena’s desktop, and parts of my desktop) is really starting to get a bit tired, so I’ve been thinking for months about replacing it. I’ve spent the entire time researching and waiting for a decent deal (narrowly missed out on one the weekend we went to Adelaide as it was in Melbourne and it was sold by the time we got back), and I finally found something below my pain threshold.

I bought a Dell R510, fairly long in the tooth in it’s own right now but a dramatic improvement over what we had. If I’ve done the math correctly, it’ll add about $20 a month to the power bill, but it’ll let me spin up VMs and throw away an ancient Pentium Prescott machine that I fire up once in a moon so it probably won’t quite cost that much in the long term.

It turned up on Thursday and I had time to play with it after work, and again after work on Friday. It’s not quite complete for my purposes - I’ll need at least three drive caddies and I only have two, and the RAID controller it came with (an H700) is not suitable for my uses (ZFS). The good news is I think I can on-sell some of the stuff it came with (two SAS drives) and possibly subsidize some of the cost.

FreeBSD runs fairly nice on it, though I do have some minor gripes with it that if I don’t sort out I may give up and go with Ubuntu instead for the base OS. I’m trying really hard not to, as with work being what it is, my personal stuff is my only opportunity to keep my FreeBSD skills somewhat current. In particular, I’m struggling with power management (not that it will help that much), though at least I’ve quieted the fans down once the OS is running!

Update - 2018-10-14: I decided to chuck Ubuntu on it just to have an experiment, and was immediately floored. For some reason, the idle power usage of Ubuntu Bionic is only about 2/3rds of what FreeBSD 11.2 is, and that’s without any tinkering at all. Messing around in FreeBSD with C-states, trying to get powerd/powermon to work, to absolutely no avail, I installed Ubuntu and fooled around a bit with LXD.

My goal with FreeBSD was to have FreeBSD on the bare-metal, with IOcage jails for each individual service, sharing the “data storage” datasets between them as needed for them to do their job (Plex, Samba, etc all need access to the “TV Shows” fileshare for example). I then was going to use (hopefully, it’s untested to me) BHyve to run one or more Linux VMs for experimenting with work stuff. It turns out all of the above is super easy on modern LXD, though I haven’t finished looking into the security ramifications of configuring it like this, but in terms of “does it work”, absolutely!