For our 18th (!!!) wedding anniversary, Sabriena arranged for us to go see a musician that she really likes, who was supporting another musician we’ve never heard of. There were two nearby shows: one in Melbourne, and one in Adelaide, with the only difference being that the one in Melbourne was on a week night, which was no good to us. As we’re pretty close to half way between Melbourne and Adelaide (and if you measure to the South-Eastern suburbs, Melbourne is actually further!), Adelaide it was.

We arranged for Duncan to stay at a friends’ place, and set off on Saturday morning. Arriving at a rest area just before Mt Barker, we started feeling a bit hungry, so looked to see what was around and quick, with the idea we’d stop somewhere nicer for dinner in Adelaide. I learned that Mt Barker has a legitimate Carl’s Jr restaraunt, an upper-tier California fast food place we’ve not had in quite some time, and so we decided to eat there. Better still, they had the Philly Cheesesteak burger back! There’s a funny story in that - I would get that exact burger at every available opportunity, and then they stopped selling it. They had little cards where you could write suggestions and comments, and so each time I’d drop the same suggestion in the box (often with a crappy little drawing): bring back the philly cheesesteak burger. So to have that burger be available in Australia was a huge deal to me!

Anyway, we ordered one each, with small fries, and plugged it into MyFitnessPal and… oh my god it’s almost a thousand calories. Too late now, and it’s a special weekend, so who cares? Then after our order arrived, a new struggle… how to finish it? I was uncomfortably full the rest of the day, Sabriena didn’t finish hers at all, and we didn’t eat dinner. How times have changed!

After we parked the car in a parking garage, we checked into a motel within walking distance of the bar the show was going to be at. We wandered around Rundle Mall and found… not much worth looking at at all. Most of the stores in there are of the variety we can get in Horsham, or the types of places we’d really have no desire to shop at (Myer at al). Back to the motel to veg out for an hour or two, and I tried to nap before waking up in a panic realizing I’d left the Nintendo Switch in the car (very silly idea in a metro area) so I wandered off to fetch it. 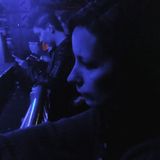 Then it was time for the show, and we arrived about 30 minutes early. Thought we were going to get flattered and asked for ID, but that wasn’t the case. Up front to a very small crowd for the first opening act, which we quite enjoyed despite never having heard of him before. Then it was time for Leif, which was a pretty great (albeit short-ish) set. Feeling our old age set in, we didn’t stick around for the main act and set off back to the motel, arriving there just before 11pm.

For some reason though, we both woke up at about 5am, lying bored as shit in bed. We got up and wandered around again, checking out some sort of running race that was taking place a couple streets over, before buying Krispy Kremes (to round out the American weekend) for breakfast and making our way back to Victoria.