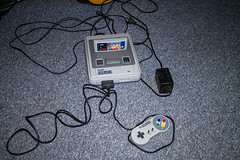 I arranged to take Duncan out to Mum and Dad’s today so he could hang out with his cousins for a while - the entire way there he wouldn’t shut the fuck up about playing Terraria on his tablet with Cody.

We got through to Avoca, where he revealed he had gotten car-sick right on the bridge, I managed to screech into the park and stop. He got out of the car before spitting up, so thankfully there wasn’t that much to clean. He was chipper again by the time we got to Mum and Dad’s.

After lunch I snuck up the shed to take yet another look for the C64, which I’m pretty sure is gone now… which doesn’t really make sense because Mum doesn’t throw anything away, and doesn’t recall selling it. Maybe it is still there, as it took me three or four rather thorough searches to find the SNES.

I found the SNES again this time, albeit with only one game and missing the RF adaptor, so I decided to bring it home and see if it worked. Interestingly enough, when Dad was asking about something to do with his computer, we found the RF adaptor just laying under a pile of cables.

I tried connecting it up to the TV there, and it had a really shit signal no matter what I did, and it took several attempts to get the game working. It kept coming up with something along the lines of “This unit won’t work with a device for copying, please see your instruction manual” which I later learned is what newer cartridges do when a certain signal pin isn’t connecting properly.

I also later learned that the poor picture isn’t due to the RF adaptor, but because most modern LCD TVs don’t cope terribly well with 240p60 (or 288p50 for PAL), but interestingly enough our 32” cheap-ass TV works great with it.

The TV is one Dad gave me when we moved out, and I really lucked out with it. It’s a Hi-Sense HL32K26PL, and it’s played everything I throw at it (including the Wii, once we found the adaptor to get RCA inputs on the TV) and it doesn’t lag whatsoever.

Another impressive thing to note is that it must have been a minimum of ten years since the game was last played, and in excess of 20 years since it was bought (for the princely sum of $35, no less!) and yet the battery backup keeping the save RAM alive is still functioning.

I need to pick up a 4.5mm “security driver” to open the SNES up and clean it, but it does work intermittently, and I would also like to grab a multi-out cable or potentially mod it for component out (though I think I’d rather keep it stock).

But now to track down the missing cartridges.