Duncan’s birthday fell during the school week this year, so we didn’t get to do anything super-fun on the day… he got to choose what he wanted for dinner (Subway, for some reason, instead of fast food or pizza) but we decided this weekend to take him bowling at Horsham Lanes & games. We invited along his friend Lincoln, and his guardians came as well, though only Donna bowled with us. Unfortunately, I forgot the camera, and the bowling alley just didn’t have good enough lighting conditions to take any photos. :( 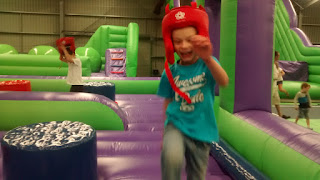 After we got done bowling, the kids were checking out the inflatable world in the same building, and since we shouted the bowling game, Donna sprung for both the kids to go in. The owner didn’t have to, but she gave Donna the combo price since we’d already been bowling, which I thought was really cool of her… I think it ended up costing $11 for each of the boys to go in for 2 hours.

Words can’t express how much fun they had - we ended up leaving about five minutes before their two hours were up, and both kids were absolutely wiped out. I tried to convince Duncan to jump off the high-jump, probably a 6 foot drop onto a giant fluffy inflatable pillow, but he wouldn’t do it. Entirely unexpectedly, Lincoln gave it a go, twice. Everything was going awesome until some kid fell over and managed to sit on Duncan’s head, giving him a bright red ear, which was the catalyst for our leaving. I was honestly expecting quite a bit more injuries, given the type of activity.