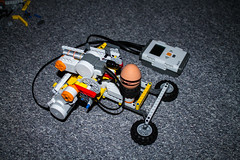 Inspired by an EV3 build of an easter egg robot, Duncan and I decided to have a go at it. We faced a couple of problems - we don’t have an EV3 set, only an NXT one along with several other sets including some very old studded pieces. Because we’re using some studded parts, I’m not going to bother putting together a MOC for this as most people who have the parts to build it would likely be able to engineer a better one.

Our egg is held vertically, and simply sits on the holder rather than being clamped in. This is fine unless “centrifugal force” caused by an unbalanced egg is sufficient to toss it out (unlikely, I think). We use three servos, instead of two and a motor. The marker is held on a sliding bed, which is driven by a servo and is self resetting (stop the program wherever and it won’t get confused). We haven’t yet made the Y axis rotator self-resetting, but I think it’ll be pretty easy simply using a touch sensor, with the boot portion of the program being set up to drive the servo backwards until the touch sensor goes off.

Currently as I write this, it’s bed time for the boy, and while you can use manual controls to drive the pens (much to his delight), it’s severely limited in what you can do with it and it’ll need a lot of calibration (the pen has to go in/out matched with the Y axis to compensate for the curvature of the egg, which is apparently not a problem in the original design).

The final problem is that changing pens is not near as easy on the original design. If we get an EV3 kit in the future, we’ll likely just build that design instead.