Checked the mail today after picking Duncan up from school, and I have a package waiting for me at the post office. I’m expecting the LED headlights for the BSA, so that must be them! In to pick them up, and sure enough it’s a package from China - this must be it.

Get them home, plug one in, kick the bike over and… nothing. What’s going on here? I tore into the electrical system, confirmed everything had continuity where it should do, still nothing. Wondering if the bulb is defective, I took it and wired it up to the 12v battery of the van and it worked, but as I’m stretching a wire across the battery it dawned on me… an LED is polarized, and this bike is positive earth.

On the plus side, these CREE LED bulbs are really bright for the power usage (my experience with LEDs leads me to wonder if they’ll stay that way after multiple hours of use, but apparently CREE is a big improvement in the technology). 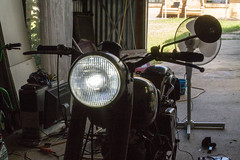 Update: I spent last night rewiring the entire bike for negative earth, and then dealing with the fact that both the high/low switch and the ancient-yet-non-standard Lucas DPDT switch to turn the light system on and off were defective (with the high/low switch spitting fire when I tried to activate it!). I ended up replacing them both with a SPST switch I had laying around, so at least I have low beam and a tail light. I’ll search for something aesthetically pleasing to replace both of them with at some point.

The headlight is really painful to look at, a dramatic increase from the 6v incandescent and the bike will be much more visible on the road for it. The only downside is that when running batteryless, the lights flicker… I’m guessing that’s because LEDs are far more responsive. I had thought about installing a capacitor in the headlight circuit, but since I want to run a battery anyway (for easier starts) I’m thinking that flickering lights might alert me to a problem before I get stranded somewhere.

Pretty happy with these bulbs though - while I had to buy two of them they worked out to about $20AUD each from China. I couldn’t find incandescents in that price range and for the time being anyway the quality of light is significantly better.