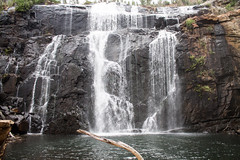 We decided to make the trip out to the Grampians today to check out Mackenzie Falls, because Sabriena saw it on a website and thought it looked great. We walked around the lookout loop, which is almost 2 kilometres of seriously light-grade walking on pleasant tracks. The falls from the lookout looked spectacular, so we hoofed it past the toilets and headed down to the falls.

That walk isn’t much further, but the change in elevation is substantial (110m instead of 10m, so 1100%) and some of the stairs are almost a foot high. Getting down was strenuous but pleasant, heading back up was extreme for a fat, slothful videogamer like myself.

After stopping several times for rests at the various lookouts and benches, we made it back to the car park to have lunch and head home.

What I do find interesting though is that Major Mitchell endeavoured to name things what the natives called them, but couldn’t speak the local tongue and so he named it Mackenzie Falls, after a friend who was a captain. We now know the native name for it, and I thought it was the done thing to call landmarks by the native name when possible so I wanted to do that when I uploaded photos to Flickr. Unfortunately though, not one of the several Victorian government and private websites referring to the place calls it by anything other than Mackenzie Falls, and I neglected to photograph the sign explaining the native name.