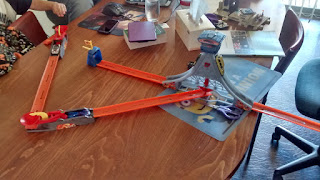 Duncan wanted Hot Wheels for Christmas, a symptom of watching various people play with them on YouTube. Sabriena ended up getting him a small set, which he was very happy with - probably more so because it was one of the few things we let him play with at my parents’ place because he wouldn’t lose the pieces so easily.

This morning we went to one of the local Opportunity Shops, and he found another small set for only three bucks. It came with a car, but it’s a Matchbox one and doesn’t glide on the tracks correctly. Also, one of the pieces of track is distorted from being bent, but otherwise it’s complete and functional.

It connects to his other set, resulting in a huge mess of track and cars that continue on after each other like a sort of domino effect. He’s also broke now.

At least it’s something different from plonking in front of the TV all day.