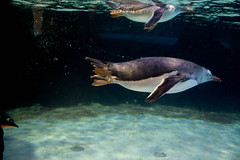 In to Melbourne for the weekend to do the tourism thing. Our first port of call was to park in Crown’s parking and head down to the Melbourne Aquarium. Duncan had an absolute blast here, and our feet were aching by the end of it.

I’m certainly glad we bought the tickets in advance online - even if there wasn’t any savings, the line for the regular tickets (which we skipped by prepaying) was out the door. A good 45-minute line if ever there were one. The only disappointment with the booking process was that there appeared to be no way to order print-your-own tickets via our RACV membership (which would have given us further savings) - the RACV discount only applies to mail order tickets or if you pay on the day. 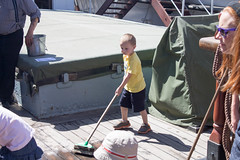 After that, we had lunch in Crown before heading out to Polly Woodside, where we luckily caught the last guided tour of the day. The guy doing the tours was fantastic, and really helped bring the ship alive. I was concerned because a lot of the stuff we’ve been doing lately hasn’t been near as awesome as I remembered it being as a kid - Polly Woodside definitely was, amply helped by our tour guide.

Finally it was off to the motel to settle in for the evening. Duncan was absolutely depleted, so we opted for Pizza in for dinner instead of going out somewhere.