Another look at Newman 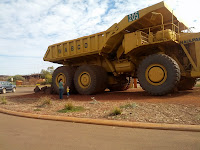 We are still around Newman, which is unfortunate because I really much prefer the weather further south. We had the most desperate of personal hygiene needs to take care of (entering my third day with no shower) and with a chronic shortage of actual truck stops it was time to look at the alternatives (we later learned that the Capricorn Roadhouse does have showers, I managed to miss them).

In to Whaleback Village in Newman itself, where we were charged a quite reasonable three bucks per adult. I feel much better, but I’ll feel even better again when we start moving south. 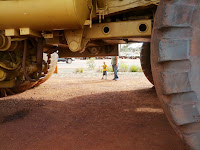 As part of our idea to do the tourism thing, we stopped in at the tourist information centre in Newman, where they have a large dump truck that surprisingly is not fenced off. There are signs asking you not to climb on it, but there’s not really much stopping you walking under it or anything.

Inside the centre is a restored Bedford truck that Stan Hilditch used to discover the iron ore that eventually became one of the world’s largest iron ore mines, which was rather neat. I’ve no idea if it’s actually in running condition or merely restored aesthetically from the outside, but Duncan quite liked it and I’m a tad miffed I neglected to get any pictures of it.