Lunch on top of the world (not quite) 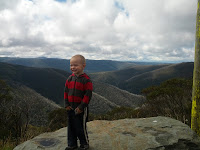 After departing Grandma’s over easter, we decided to take a break from our constant life of driving and go for a drive…

… sounds stupid, except that we decided to do the Great Alpine Road, which is something we’ll likely never get to do for work. We had a really great time, including a sandwich lunch at almost the top of Mt Hotham.

It was pretty fun literally driving through the clouds, although it was the tiniest bit chilly (which sounds weird compared to what we’re used to in Indiana). 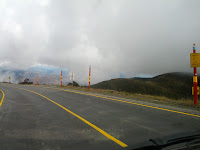 Sabriena didn’t much appreciate the drive over the top and down the other side, what with the lack of guard rails at times, the steep slopes where you look over the edge and can’t see the bottom (exacerbated by the bushfire that tore through and removed all the vegetation that normally covers up such horror), and me just generally making a joke about it.

The day was a really fantastic drive though, but the descent was exhausting. Because so much of the road is damaged from said bushfire, including one part where the road is down to one lane due to a landslide, most of the descent was done at about 25KPH, which is too slow for cruise control. To make matters worse, even at very low gears, the Sprinter is not particularly good at engine braking, requiring periodic stabs of the brakes to keep it from ruining the engine.

Reaching Harrietville was an entirely different type of beautiful scenery again, and we ended up stopping out at my sister’s place for the afternoon before heading off home.