We decided to make the most of having an entire day off and head out to see the Adelaide Zoo (which was formerly most likely going to have to wait until after easter, but was always on the agenda). The weather seemed slightly inclement, including the heaviest shower of the day coming down literally as we took shelter under the bus stop right outside the place. We decided to be brave, and it turned out the weather was about perfect - we never actually got rained on enough to get wet, but the weather kept most of the people away from the zoo.

I really like the Adelaide Zoo. The grounds, particularly around the Panda enclosure, absolutely put Fort Wayne’s Zoo to shame - but then again I think Zoos in Australia tend to get more government assistance than the average US zoo would. 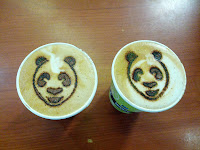 We took sandwiches, coffee and water in with us, trying to minimize what was already going to be a pretty expensive day out - it cost about $12 to park and $63 to get in. It turned out we didn’t quite bring enough drinks, and we decided to get a couple of Cappuccinos from one of the cafes. It turns out the prices there for everything were pretty reasonable, compared to other Zoos, and the cappuccinos even had cute little panda faces in the tops of them. 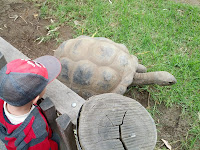 A lot of the enclosures are very well done - I much prefer the enclosures rather than cages and it seems like the Adelaide Zoo is phasing out the latter? There were a lot of empty enclosures, and a lot of animals were sleeping due to the weather (I didn’t get to see a Tasmanian Devil, despite walking past thrice), but lots of the animals you could get really close to and many of them even had designated petting areas.

We made the mistake of buying a $2 bag of food in the goat/deer petting area, which we apparently didn’t empty fast enough and a couple of particularly rambunctious goats decided to take matters into their own hands. They ended up eating the entire bag of food, including the bag, after taking it off of Sabriena. 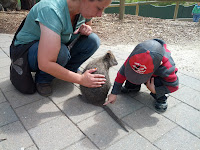 Duncan really enjoyed himself the entire day, including petting various animals. He was a lot more brave and a lot better behaved than I thought he’d be. We also caught several of the feedings, some of which included talks by the various zoo keepers who were doing the feedings. The lioness feeding was particularly awesome, and I think the keeper must have had balls of steel to not even flinch as the second lioness batted at the cage inches from his face demanding more food.

The Little Penguin feeding was particularly awesome, though the keeper spoke far too quietly for the crowd - we were pretty much as close as we could get and I had a hard time hearing him.

It’s not a cheap day out, but it’s more reasonable than other zoos - and it’s definitely a great hands-on experience if you time everything just right. 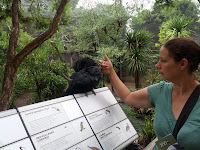 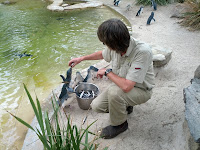 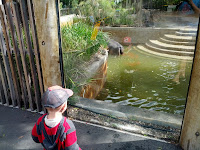