We’re back at Mum’s house again for a little while, then it’s up to Sydney and back out west again before Christmas.

We got the electrical problems sorted out at least, even though it was quite expensive. We needed a new alternator it turned out, so we decided to pull the trigger in putting a larger one in as the fridge, lights, laptop and everything else are probably too much for the original 50 amp unit. 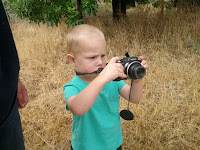 A larger alternator meant we needed larger cables (which again, they were a little worse for wear and I wanted to replace them anyway). So it’s good that all that stuff is replaced now, I just was hoping to wait until after Christmas instead of dropping all that money beforehand.

I still need to service the transmission and add the cooler we bought, as I’m pretty sure that’s what was causing the cooling issues. It’d be nice if it just needed a service, but we’ll put the cooler on anyway to make sure it stays reliable. This weekend is going to be busy.

We went for a walk down the paddocks to see my sister’s new foal that’s just been born. Duncan decided to abscond with the camera, but using my phone I managed to snap the very grown-up shot to the left.