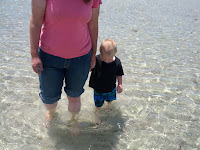 So the second job we had lined up got delayed another twenty four hours, leaving us in Adelaide with nothing to do. We took a small jaunt out to Semaphore park, since it was a nice day. We didn’t end up seeing the fort, but that’s okay - Duncan played pretty hard and really needed a nap.

After a quick dip of the toes in the beach, we went back to the car park for lunch, and then off to the playground. Duncan went down the really big slide a couple of times, but it was a bit fast, so he ended up sliding down the rubber flooring on his arse instead.

He made friends with a couple of other little boys there, but it was pretty clear towards the end how tired he was. His hyperactivity and screaming didn’t convince us one little bit that he wasn’t tired, and I don’t even think it convinced him either. 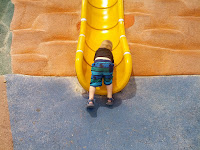 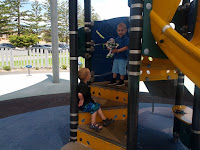 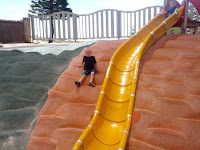