So we’re off on our second voyage in the Falcon, “Bessie.” Sabriena has this (not uncommon) thing about naming cars, and her and Duncan discussed it and said she felt like a “Bessie,” so that’s that.

We’re off across the Nullarbor this time, again not an easy thing to stomach given our history with vehicles and South Australia. I’m optimistic everything will go okay (at least I’m trying to be), and this trip will be a nice little earner for us even though we stand bugger all chance of getting a load back.

The last time we pointed a vehicle towards Western Australia it didn’t go so well, but here’s hoping this time will be different. 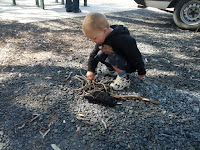 We stopped at the Victoria/SA border for the night, because quite frankly I hit the video games way too hard the last few nights and I was in no shape to be driving for an entire day. There’s a really nice rest area just east of Bordertown that we’ve camped at before, so that’s where we stopped.

Duncan’s developed this weird obsession with “making fires” everywhere - it took us a bit to figure out what he was doing. He gathers up sticks, breaks the ones he can and arranges them in little bundles. I haven’t the heart to tell him it’s the wrong time of year for camp fires.