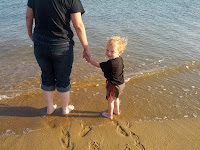 We’re broken down again, this time it’s back in Mackay. We actually broken down on the back side of the range, but we managed to limp it into Mackay itself to hopefully see the Ford dealer here. It looks as though the fuel line we just had replaced (pressure line from the back of the injector pump to the common rail) is leaking again - whether it’s broken or has just come loose remains to be seen.

We ended up spending the night at Iluka Park, which is quite a nice little setup - complete with a playground that also contains a variety of activities suitable for developmentally or otherwise disabled kids. It’s actually kinda neat. 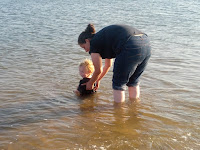 The tide was in and it didn’t appear to be Box Jellyfish season so we decided to dip our feet. A far cry from last time, Duncan actually really enjoyed the water this time around. Splashing around in the waves was fun, and he almost didn’t mind a bit of salt-water in the eyes.

There are showers in the public toilets at Iluka Park, however they’re the “surfie-style” cold water only showers. Being that I used to surf in my youth, I thought I was prepared for what it would be like trying to bathe in one… I was wrong. It was absolutely terrible, despite me doing it on the hottest part of the day. 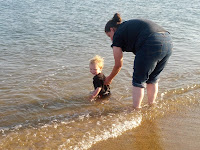 Sunday, we decided to limp around to the other park (so as not to spend two nights at the same park and draw attention to ourselves - I don’t know if there’s a distinction between “camping” and “parking”, nor do I know how well our excuse of “managing fatigue” will go), which is close to the ford dealer and also happened to be close to the shopping centre.

It was probably just as well, we’ve got a ton of stuff we needed to buy. We should have enough diesel in the bonus tank to get back to the Ford dealer, and then to a service station assuming they can fix it quickly. If they don’t, I have no idea what we’re going to do for Monday night. :(