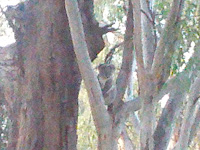 I whined on no less than two outlets (in addition to copious verbal whining) about how we’d spent the entire day at Gunnedah (“Koala capital of the world”) looking for Koalas that taunted us with their non-presence.

For this last trip, we neglected to bring the camera battery (our current P+S camera is a Sony DSC-H3, which requires a special rechargeable battery), so in the morning at Kangaroo Flats wildlife reserve, I started scanning the treetops almost certain that we’d see one because we lacked the camera.

Well I was right about the circumstances, simply wrong about the location. We stopped for the night in Narrandera, NSW, at the CalTex truck stop at the south end of town. After fueling up and getting everything ready to cook some dinner on the picnic tables out behind it, I went inside to use the facilities. When I came out Sabriena was basically motioning at me frantically as if someone had just tried to break into the car or something. It turns out, there’s a Koala sitting right in the tree watching her cook. 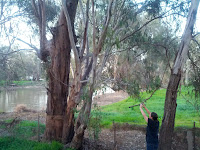 It turns out he’d just been watching us almost the entire time. We tried to get some photos without getting close enough to disturb him into moving, but there’s only so much you can do with camera phones.

Hopefully we have the decent camera (or a new DSLR) by the time we get another opportunity like this.