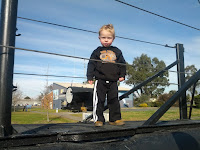 On our way back south, we decided to stop in at a town called Holbrook, which houses a giant submarine. It’s actually the top skin of an actual submarine, and it seems as though they almost encourage climbing on it. Naturally Duncan thought that this was the bee’s knees.

Apparently Holbrook has not one, but two submarines - the second one is just a scale model that apparently my parents let me play around when I was about Duncan’s age as well, so it’s funny how things sort of come full-circle. 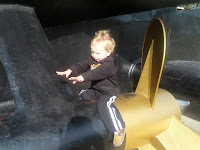 I had to spend some time on the phone to organize where to go next, so Sabriena and Duncan played around on the submarine and went to check out the Submarine museum, as well as the “Duck’s Arse” of the same submarine.

We didn’t wait around too long, nor did we check out the smaller model Submarine, but Duncan had a great time with the HMAS Otway.