Our DSL modem was overheating… 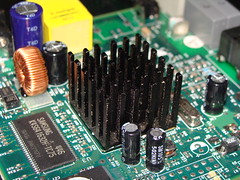 Every summer, without fail, our DSL likes to drop on hot evenings.

I even bought another modem at a yard sale, thinking that maybe ours was on the fritz – but no… same M.O.: laggy/lossy connection, then no connection, go downstairs and the modem’s really hot to the touch. It probably doesn’t help that it’s in a small closet under our stairs with the router and everything else, but even if we keep the door open with a box fan blowing in there it still does it.

As I was throwing away a bunch of old stuff, I happened upon an old add-on DVR I’d bought to steal the drive out of. I opened the lid just to see if there was anything else in there I may want, and there it is – a small square heatsink just the perfect size for the little ARM (I think? Could be MIPS though) CPU in our SpeedStream 4100. I pulled it off, then used a razor to scrape all the old thermal pad off. I mixed up some thermal expoxy, applied a really thin layer and glued it to the top of the CPU in the modem, as you can see on the left. 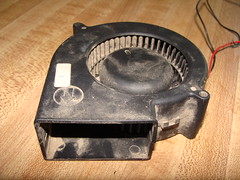 We since went about 4 nights with no disconnects, despite the fact the top of the heatsink still got a bit warm to the touch. I was not taking any chances though, I wanted to attach a fan to it as well.

It’s been a while since I’ve had an excuse to get this uhh…. AfroTech on any project. I’m terminally lazy and still obsessed with genuinely attempting to do things The Right Way, so this site hasn’t seen much action as of late. Anyway, I grabbed an old squirrelcage fan I’ve had laying around a while – I don’t know how many CFM this thing is rated for, but let me tell you on 12v it is like a hair dryer. I scrounged up an old 5vDC PSU to power it because I didn’t quite need it to roar that bad. 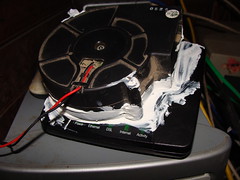 I cut a hole in the top of the DSL modem for the heatsink to poke through into the front of the fan. I thought about having the exhaust blow inwards, but frankly it looked stupid – not to mention flimsy. In the end I decided to go negative pressure, with the exhaust blowing off the side.

The top of the modem is quite curved, so it really didn’t fit all that well when I affixed the fan to it. So I broke out some latex based sealent and caked it around the gaps. The air is sucked in via the vents under the board, makes its way around the board and over the heatsink and out the exhaust.

So I took a break from authoring this post, and it’s now about a week short of 2 months since I started working on it. The uptime on the modem speaks for itself:

I actually rebooted the modem at that time on purpose, it turned out it was a problem at AT&T’s end. For all intents and purposes, the modem’s been up and synced since I plugged it in. Considering we’ve had some really really hot days here, that’s a huge improvement.