Today, the Mega Drive I bought last week in a spur-of-the-moment decision finally arrived. The seller shipped it via OfficeWorks’ “Mailman” service, which I’ve got to say I wasn’t particularly impressed with. The seller lives in Greater Melbourne and it still took three days for a “courier” to pick the package up according to their tracking system.

Anyway, it turned up and I wasn’t super-impressed. It was packed well, and came with four boxed games as advertised. But the PSU was wrong (12vac! The MD1 is 9vdc!), it’s one of the really piss-poor PAL mod jobs that some company did in the 90s. The pad is a knock-off that looked like a six-button unit, but is actually a 3-button and 3-turbo unit. Worse still, the pad doesn’t work! Two of the buttons are no good!

That’s no great loss, as I was more concerned if the unit itself works. Sure enough, it does, at least with one of the bundled games, Same! Same! Same! (“Shark! Shark! Shark!”, or Fire Shark in English regions). I need to get a PSU and an RGB cable, but I’m pretty happy.

The included games are a mixed bag - two of them, Super Monaco GP and Super Real Basketball aren’t really worth anything at all… a couple of bucks maybe. , and the other one is apparently a bootleg copy of the unreleased Tetris - too bad it’s not real, where there are only about 10 of them in the world, but even the bootleg is worth a reasonable amount making it more than worth it for the whole mess (Edit: looks like they’re all bootlegs, I’m suspecting this whole system may have come from one of the PAL asian countries that didn’t have a licensed Sega distributor, so I bought a cheap MD1 and got some trash with it). 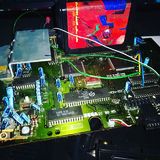 But first - fixing this busted-ass region mod. In order to display on our TVs, the modders converted it to 50Hz. But they left it in Japanese language, so it would play the Japanese cartridges. I don’t really care about the Japanese games, I honestly just wanted a cheap MegaDrive (and even discounting the games, this one was cheap enough). I already had a PAL copy of Comix Zone I want to play, though it is region locked (will only boot in PAL+English territories), and the MD is unique in that region modding it is very trivial.

The MD/Genesis console itself has no region protection whatsoever. It’s programmed with a frequency and a language, usually by hardware jumpers. By desoldering all these jumpers, and then wiring a three-position switch to it, doing a global region mod becomes utterly trivial, so that’s exactly what I did. With the switch in the middle, it’s NTSC-English. To the right, PAL-English, and left is NTSC-Japanese. I put the switch where the normal RFU output would have gone, after taping it up so it wouldn’t short anything.

So by tonight, I managed to get the region mod all finished, but with one caveat: I forgot about the physical latch in Japanese consoles to keep the cartridge in place when the power switch is on. I’ll have to remove or neuter that somehow, then it’s perfect. When I get an RGB cable, remove the RFU, and replace the PSU and get a couple of pads and I’ll be all set.