The local Facebook group that lists garage sales (mostly one guy, doing the lord’s work by aggregating notices posted on other sites, but on occasion people post their own for him) had a huge list of garage sales this weekend, so we decided to go out and have a look.

Didn’t find much at most of them, particularly because I’m looking for retro video game stuff and it seems to be a sellers market for that stuff here, but at the very last one Duncan got a few toys for very cheap (these people knew how to have a garage sale!) and I found an interesting looking game console for next to nothing, so I decided to take a gamble on it, despite not having any idea what it was.

It’s a “Sheen” video game system, apparently one of almost a hundred different Pong clones powered by the AY-3-8500 IC, this one made in around 1977 (older than I am!). It’s not particularly rare, or interesting, but I don’t have much in it. I brought it home, did a bit of research, then decided to take it apart and inspect it before I powered it on.

The PSU is weird, supposed to be 9vdc but puts out over 12v without any load on it. There’s a speaker built into the unit itself, so I know it’s working. Someone’s obviously had it apart, and it looks like someone’s re-capped it too - the electrolytics in it bear a logo from a company that’s only been around about 20 years, though I suppose it’s not entirely impossible that the company is re-using the logo of an earlier company? The ceramic caps don’t look original either, but this was made in Hong Kong in the 70s so quality varying wildly wouldn’t be surprising.

Most concerning though is that the EMF shield around the RF modulator is missing. As mentioned earlier, the unit is definitely working, but I can’t get a picture on my TV, and I’m not sure whether that’s because the RF modulator is buggered (you can faintly see the picture when tuning around CH4, but it’s very unstable and snowy) or just because my TV doesn’t like the RF input. My TV has no problems displaying 240p from the SNES, but I dunno.

At this stage I’m leaning towards modding it to generate composite out, because it seems rather trivial to do. Unfortunately by the time I found out what I needed to perform that task, the local electronics shop had closed for the weekend, so it’ll have to wait until at least monday now.

I found a couple of articles about doing composite mods on similar consoles, and I managed to put together a circuit on breadboard based off the plans others have provided. It cost me roughly $15 in parts at the local supplier (probably would have saved a fair bit of that mail ordering the components, but long-time readers will note I’m incredibly impatient).

After I bought the parts, I found out I could simply have used a single channel of a THS7314 RGB amplifier, and a voltage regulator to bring the system voltage down to the level that IC expects, but I don’t know if that would have worked out any cheaper or simpler.

Thus far I haven’t tested it. 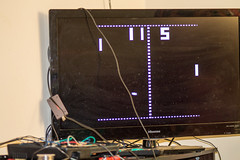 Well, that was a waste. Some friends on IRC advised that they didn’t think the circuit would work the way this person had described - that the signal would be too low. I don’t really understand transistors (having only a passing knowledge of what they do at a layperson’s level), and I reasoned that it wasn’t much so I bought them anyway. I put it all together, soldered it in and hooked it up to my TV and…

Yuck! The screen is fuzzy, and some of the components are missing. I started bypassing components on the amp, then tried to work out what was going on with the mainboard - which was a rabbit hole of sorts. One of the player paddles and the score/field go through a NAND gate, which has all the pins tied together into a configuration that I am reasonably convinced becomes effectively a NOT gate. I don’t know why they do that. Other components go through various resistors and such.

As I threw away more and more components, I ended up simply tying all the components together into a single video signal and connecting it straight to my TV’s composite input, and I get a perfectly clear picture. It’s probably wildly out of spec (considering that the internal voltage as measured at the IC’s VCC pin is 6vdc, and composite video should be 5vdc) but our TV didn’t seem to mind.

I’ll likely lift the legs on the components I’m not using and have another go at building an amplifier once I’m more certain of what I’m doing, but for now I’ve put the thing up in the back closet… at least I know it works.