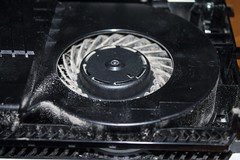 I’ve noticed some frame drops while playing GTAV and the characteristic roaring of a device that’s working too hard to keep itself cool and came to the conclusion that it was time to clean the dust out of the PS4.

I took a look for a guide online, and found most of them pretty lacking. Many of them simply talk about clearing the dust out of the vents on the edges, but they get into so much other questionable bullshit I found myself not entirely convinced. Cleaning out the actual heatsinks involved physically disassembling the device at least part way, so first… to check if the warranty is expired.

It has, so I set about taking it apart. The skinny side of the top cover simply slides off, exposing the hard disk, removal of which isn’t actually required to get to the heatsink but I did it anyway. You then have to flip it over and remove three “security” torx screws on the back side, covered by stickers. There’s a second warranty sticker covering the centre screw in the top cover, that’s not necessary to remove.

Slide the back of the cover up, then the whole cover to the front of the device and it comes clear pretty easy. This exposes the squirrel cage fan, which looked at first glance to be pretty caked in dust, but wasn’t actually as bad as it first looked.

Getting access to the heat sink requires removing the PSU, which was the most difficult part for me. All the guides (iFixit has a video which is utterly useless - it’s the photos from their guide shown in a slideshow while someone reads out what’s in the article) gloss over the removal of the PSU so when it wouldn’t come free straight away I was left scratching my head.

I eventually got it out, not entirely sure how I managed to, and was able to inspect the heatsink: spotless. Next time I take the cover off I reckon I’ll just take the back cover off and shoot a can of air through the power supply region from the back vent, while holding the fan still to ensure it doesn’t over-spin, then clean the rest from the outside.

In general though, I think simply cleaning the external vents would have been more than sufficient.