Duncan got an award! 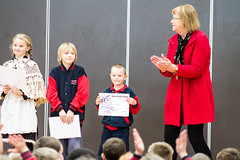 On Monday we got a call from Duncan’s school right before it was time to pick him up, saying that he was getting an award on Friday if we would like to attend the assembly. Before that, there would be a picnic on the grounds of the other campus of his school, and we were welcome to attend that too. Okay!

Today was the day, so we packed sandwiches. We had thought about getting Subway, but thought that maybe fast food would be inappropriate at a primary school… it turned out plenty of other parents had the same idea, lots of fried chicken and burgers when we got there! We enjoyed our sandwiches anyway, so not a problem.

Then after the kids played for a bit, everyone filed into the gymnasium for the assembly. Duncan received an award about halfway through, the school award for Honesty. That’s not surprising really, he tells the occasional white lie (“Yes, I washed my hands before dinner!”) but for the most part he’s a really honest kid. I hope he stays that way.

After the assembly we got to take him home early as well, and I gave him the Skylanders: Swap Force we bought him earlier in the day because it was super cheap (we’ve really got to stop spending so much damn money on games), so we’ll play that a bit tonight.