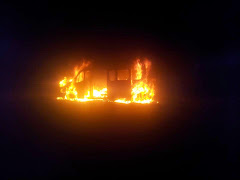 Judging from recurring memes on the internet, most people’s 2014 sucked. My parents did anyway - in addition to a year with very little work, someone jumped the fence and torched one of their vans last night, almost $20,000 down the toilet.

There’s been a lot of curious goings on at Mum and Dad’s place the last few years. At first when my brother in law, Luke, would say that someone’s been in the shed I thought he was just being paranoid. The shed is filled with possums who are wont to knock shit down, and why would someone go to the trouble of trespassing and not steal anything of any value (most of the shit Luke would complain was missing were things worth at most twenty bucks and with bugger all resale value).

But in 2013 an entire flock of chickens and ducks went missing from the coop - not unusual if a fox or dog got in… except there was no feathers or bodies. I mused at the time that the culprit was most likely two-legged. Fast forward to just before Christmas and one of the chickens in the mobile pen was killed with it’s head cut off. That could have been passed off as a passing canine who just happened to catch a chicken silly enough to stick it’s head out of the cage, except the baling twine my sister used to tie the cage shut had been burned through.

Last year I was considering buying my parents a 4-camera security system for Christmas, but they were still pretty expensive and I really didn’t have the money. I’m starting to think I should have.

Our new year was mostly quieter, we went to bed around 10:30PM and were woken by the sounds of what I assume were pirate fireworks right on the midnight. The night before NYE, some punk kid ran up and kicked our security door - I’m assuming as a dare. No big deal, really.