Had a power outage last night - the first proper one I can remember since we arrived in Australia, which isn’t bad considering just an hour or so south Grog has horrific problems with them. Unfortunately this one left us with about 70~80v on the line for a few minutes afterwards. We had to pull the plug on the desktop when we noticed it started to stink a bit like electrical burning - I theorize that the PSU was switched to 110v mode and was trying to bump the voltage up. 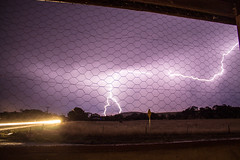 Had some impressive lightning during the outage, so with nothing else to do I sat on the porch and took a few long-exposure photos of it. We’re lacking a decent tripod, and focusing it in the dark was tricky, but I got a couple of okay shots.

Apparently the power came back on at about 12:30 - I remember the fan in the bedroom starting up again but didn’t pay attention to the time.

Up this morning at about 5:45am and out for a run before Duncan woke up. Came back and he got up as soon as Sabriena got out of the shower, which worked out okay. I was definitely feeling the lack of sleep though.

Checked all the PCs and stuff, our desktop appears to work but I’ll have to run a burn-in test to ensure there’s no damage. Moved the FreeBSD router out of the bedroom and hooked it up near the fridge (finally being sick of the howling fans every so often at night), only to find it came up but has no internet access. I immediately suspected the ADSL modem had croaked (it’s only a few months old), but it turns out we’ve got no phone either.

Made a call to Telstra, apparently we’re looking at about a 16 hour response time for the tech it’s been escalated to. I hope it’s not offline that long, I’ve got work to do. :/