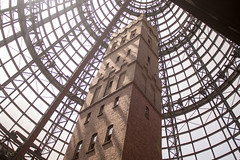 Our last night in the motel spent, we packed everything into the car and headed in to see what else we could see in the city. I was hoping to catch the Santa’s workshop if Melbourne Central still did it, as well as the Myer Windows.

It turns out the Myer windows are good until about the 5th of January. The workshop built into the shot tower unfortunately not so much. I can’t even tell if they simply don’t do it anymore, or if they already removed it. We wandered around the mall for a while before heading out to the Myer windows.

Next we headed out to the museum to park the car, and wander around… unfortunately our feet were really not in it, and we didn’t see the entire thing. A movie sounded like a good excuse to rest our feet, so we caught a taxi back to Central and saw Frozen, after having lunch at the Pancake Parlor… where, much to everyone’s amusement (including the waiter) Dad ordered an Alice in Wonderland.

After the movie we pretty much just headed back to the car and headed for home, exhausted.