Time for a new Bike 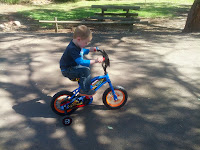 Duncan finally figured out the pedal motion for the little plastic tricycle my sister got him before we landed in Australia, so I decided not to bother waiting for Santa to bring him a bike and just to buy him one. Sabriena reluctantly (or not so) agreed.

I don’t really know where this kid gets his short fuse from, but boy does he get frustrated amazingly easy. But after a few days now, he’s finally picking it up (though he still doesn’t understand that it’s easier to keep the thing moving than it is to start it again).

His balance is already quite good, so I don’t think it’ll be too long before the training wheels come off.