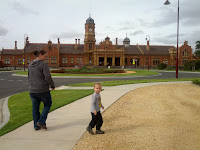 Today is Duncan’s birthday in the AEST time zone, so after giving him his presents before breakfast (which turned out to be a “hungry” idea, in retrospect) it was off to Maryborough to spoil him. 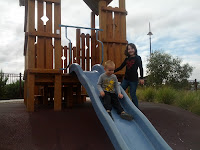 He’s been wanting to play at the park outside of the train station ever since we got here, and for some reason we’ve never gotten around to it - so I decided that today was the day. He went nuts, but thankfully not so nuts as to forget his potty training, and we managed to coax him back out of the playground momentarily without too much of a fight.

He made a friend as well, despite her being a bit older. They played around the playground a little bit until it was time for the swings, where I sure wasn’t going to let her put him in a swing! 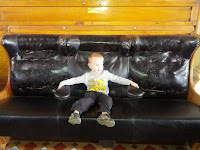 After a while Duncan started to get hungry, and insisted on “fries” for lunch, which pretty much meant the McDonalds that’s easily visible across a few acres of lawn outside the train station. But first, we took a wander through the train station that Mark Twain famously wrote about, and that the town of Maryborough will certainly not let you forget.

Duncan seemed a little disappointed that there was only one train and it wasn’t moving - I think he expected it to be all Chuggington once you crossed the fence line, but overall he had fun.

After lunch (which for some reason is always an ordeal at the McDonalds in Maryborough), it was off to K-Mart so he could spend the $10 gift card my grandmother had given him. After changing his mind many times, with some coercion he finally settled on a plastic CAT front-end loader: 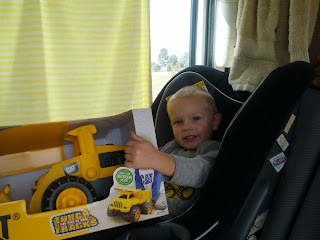