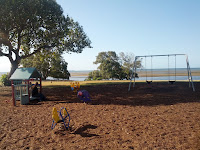 Since we’ve nothing to do for ages, and we were north of the Airport after having checked out the Charles Kingsford Smith memorial, we decided to take a gamble and head on up to Nudgee Beach. It looked more “out of the way” and less “tourist friendly” to say, Surfer’s Paradise, but it was a lot closer to where we were.

It turned out to be right up our alley. There’s free barbecues and picnic benches where we made a late lunch, and then we took a stroll around the board walk and saw a whole bunch of really neat things. Since the tide was coming in quite rapidly, we got to see all the different types of fish that come in to feed on the algae and things near the mouth of the river.

I think I got some really good photos of said fish (they’re some type of bottom feeder, not sure what), but sadly we lack a working Memory Stick reader to get the photos off our camera. Once some money starts rolling in I hope to buy another one - probably won’t be soon enough though as we’ve only room for about another 200 shots left on the camera. :(

We also did our good deed for the day - one of the birds around here had it’s leg bound up in fishing line. A quick call to Queensland Parks and Wildlife and you’re transferred to the RSCPA hotline where they connect you to someone who can come out and help the injured wildlife. I don’t know when/if someone will come out, but hopefully karma smiles on me at least, and it didn’t take much effort on my behalf to report it.