So we got a pretty good deal on a “new to us” car - it’s a 1993 Oldsmobile Cutlass Ciera and we’ve got just over $300 in it so far. The downsides: it needed a harmonic balancer, the rear half of the exhaust (cat-back), and a tune up. 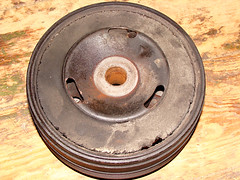 Today I finally managed (after many, many hours stuck into it) to get the harmonic balancer off and replace it. You can see the old one to the left, the rubber is completely tore off so you have two separate pieces of metal - one’s attached to the crank and has the crank positioning sensor, and the other drives the belts. When this bad boy was on there, the motor would start and there’s three or four “prongs” inside of it that allow the motor to “limp home” - they’ll engage with a rather loud ruckus and push the serpentine belt around…

So why’d it take me so long? The bolt that holds the balancer to the crankshaft is on there tight. Depending on the source you ask, it’s torqued to between 225 ft/lbs and 300 ft/lbs - that’s tight! I realized quite early on I wasn’t going to remove it with just my breaker bar and a 15/16ths socket because the compression of the motor wouldn’t stop it from turning, so I went and borrowed an impact driver. I then went and borrowed a bigger air compressor, because mine isn’t really big enough to be driving an impact driver for that kind of workload.

The idea is that the impact driver won’t turn the crankshaft, it just keeps tapping at the bolt hopefully undoing it. Well, after a good many hours at it, it became clear that wasn’t the case. My theory is that the compression stroke of which ever piston happened to be on it was acting as somewhat of a cushion, preventing the full torque of the impact driver from imparting on the bolt. Before you ask, no the bolt is not reverse-threaded (I checked).

Finally, in desperation, I took the flywheel covers off the bottom of the motor, and used a cold chisel that was a perfect fit, and a pair of vice grips to hold the flywheel in place, taking care not to allow it to be distorted by the torque. Then we used an old breaker bar with length of pipe over it, and myself and my brother in law finally managed to break the bolt free.

A quick rigging-up of a puller and I had the old balancer off and the new one on it in no time. It still needs an exhaust and a tune up, but at least now it’s drivable. Oh and it blue-books from $700-1000, so it’s a pretty sound investment so far - I think I’ll have maybe $450 in it by the time I’m all done with it.